Let us celebrate the motherhood of the Virgin Mary, and let us worship Christ the Lord, her Son.

Second reading from the office of readings; A letter of St Athanasius

The Word took our nature from Mary
The Word took to himself the sons of Abraham, says the Apostle, and so had to be like his brothers in all things. He had then to take a body like ours. This explains the fact of Mary’s presence: she is to provide him with a body of his own, to be offered for our sake. Scripture records her giving birth, and says: She wrapped him in swaddling clothes. Her breasts, which fed him, were called blessed. Sacrifice was offered because the child was her firstborn. Gabriel used careful and prudent language when he announced his birth. He did not speak of “what will be born in you” to avoid the impression that a body would be introduced into her womb from outside; he spoke of “what will be born from you,” so that we might know by faith that her child originated within her and from her.
By taking our nature and offering it in sacrifice, the Word was to destroy it completely and then invest it with his own nature, and so prompt the Apostle to say: This corruptible body must put on incorruption; this mortal body must put on immortality.
This was not done in outward show only, as some have imagined. This is not so. Our Saviour truly became man, and from this has followed the salvation of man as a whole. Our salvation is in no way fictitious, nor does it apply only to the body. The salvation of the whole man, that is, of soul and body, has really been achieved in the Word himself.
What was born of Mary was therefore human by nature, in accordance with the inspired Scriptures, and the body of the Lord was a true body: It was a true body because it was the same as ours. Mary, you see, is our sister, for we are all born from Adam.
The words of St John, the Word was made flesh, bear the same meaning, as we may see from a similar turn of phrase in St Paul: Christ was made a curse for our sake. Man’s body has acquired something great through its communion and union with the Word. From being mortal it has been made immortal; though it was a living body it has become a spiritual one; though it was made from the earth it has passed through the gates of heaven.
Even when the Word takes a body from Mary, the Trinity remains a Trinity, with neither increase nor decrease. It is for ever perfect. In the Trinity we acknowledge one Godhead, and thus one God, the Father of the Word, is proclaimed in the Church
Posted by Brother dismas Mary of the Cross at 4:26 PM No comments:

7th day within the Octave of Christmas

Happy New Year and God's peace to you all!!

A sermon of Pope St Leo the Great
The birthday of the Lord is the birthday of peace
God’s Son did not disdain to become a baby. Although with the passing of the years he moved from infancy to maturity, and although with the triumph of his passion and resurrection all the actions of humility which he undertook for us were finished, still today’s festival renews for us the holy childhood of Jesus born of the Virgin Mary. In adoring the birth of our Saviour, we find we are celebrating the commencement of our own life, for the birth of Christ is the source of life for Christian folk, and the birthday of the Head is the birthday of the body.
Every individual that is called has his own place, and all the sons of the Church are separated from one another by intervals of time. Nevertheless, just as the entire body of the faithful is born in the font of baptism, crucified with Christ in his passion, raised again in his resurrection, and placed at the Father’s right hand in his ascension, so with Him are they born in this nativity.
For this is true of any believer in whatever part of the world, that once he is reborn in Christ he abandons the old paths of his original nature and passes into a new man by being reborn. He is no longer counted as part of his earthly father’s stock but among the seed of the Saviour, who became the Son of man in order that we might have the power to be the sons of God.
For unless He came down to us in this humiliation, no one could reach his presence by any merits of his own.
The very greatness of the gift conferred demands of us reverence worthy of its splendour. For, as the blessed Apostle teaches, We have received not the spirit of this world but the Spirit which is of God, that we may know the things which are given us by God. That Spirit can in no other way be rightly worshipped, except by offering him that which we received from him.
But in the treasures of the Lord’s bounty what can we find so suitable to the honour of the present feast as the peace which at the Lord’s nativity was first proclaimed by the angel-choir?
For it is that peace which brings forth the sons of God. That peace is the nurse of love and the mother of unity, the rest of the blessed and our eternal home. That peace has the special task of joining to God those whom it removes from the world.
So those who are born not of blood nor of the will of the flesh nor of the will of man but of God must offer to the Father the unanimity of peace-loving sons, and all of them, adopted parts of the mystical Body of Christ, must meet in the First-begotten of the new creation. He came to do not his own will but the will of the one who sent him; and so too the Father in his gracious favour has adopted as his heirs not those that are discordant nor those that are unlike him, but those that are one with him in feeling and in affection. Those who are re-modelled after one pattern must have a spirit like the model.
The birthday of the Lord is the birthday of peace: for thus says the Apostle, He is our peace, who made both one; because whether we are Jew or Gentile, through Him we have access in one Spirit to the Father.
Posted by Brother dismas Mary of the Cross at 5:49 PM No comments:

December 13, 2009......Holy Family church, Bakau, The Gambia
Afterthe Bishop delivered the homilyamd returned to his seat,,he called me to come foward. "What do you ask of God and the Church" I answered that "with all my being I ask to be consecrated as a canonical hermit and to solemly profess profess the evangelical counsels plus a fourth vow to pray for Clergy,religious Hermits and Consecrated Virgins throughout the world, but mostespecially in this diocese. 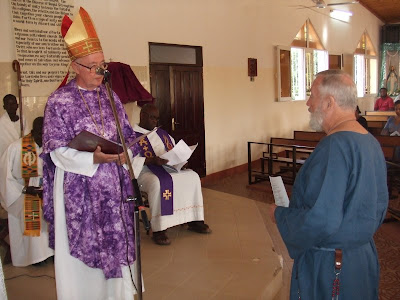 Then he asked further questions and instructed me face the community and pronounce my solemn profession to the church. 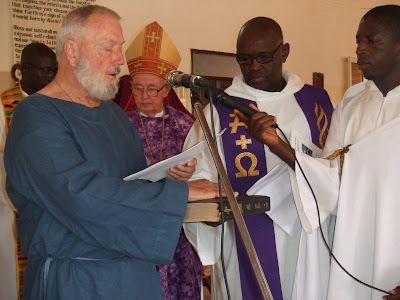 With my right hand on the scripture I made my profession. 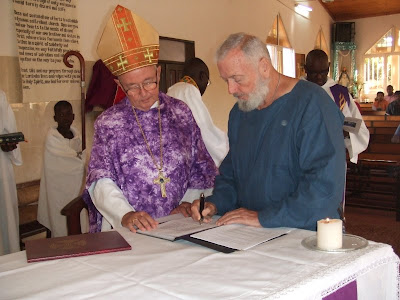 I then signed my solems vows at the altar.

This was followed by the blessing of my scalular, profession cross and choir mantle

Then The scapular was placed over my tunic and cincture 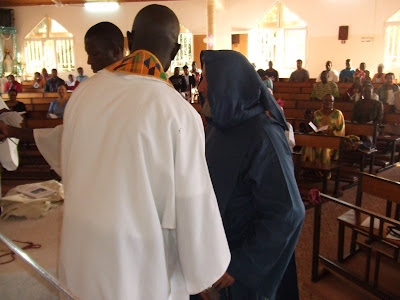 Then I received my profession cross 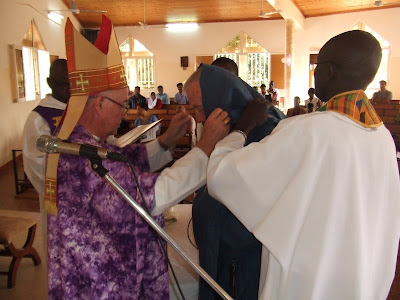 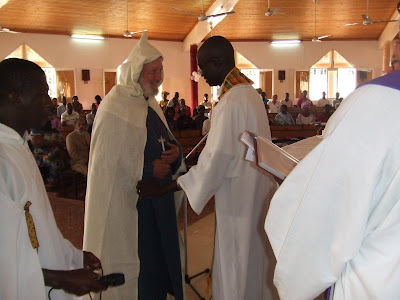 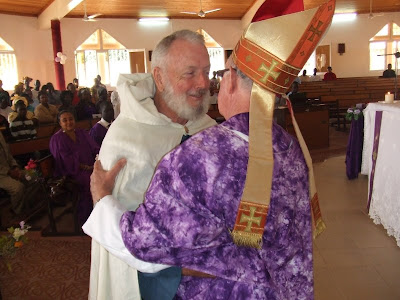 Kiss of Peace from the Bishop
Kiss Peace From Fr. Tony Sonko, My Spiritual Director
Kiss of Peace from Father Peter Jammeh, Assistant Pastor
The ceremony has ended and the Liturgy of the Eucharist begins. I received the bread and wine and went to my pew to pray for all my family, friends, benefactors...especially my Brother Jackie and my sister Peggy and my Mom and grandmother who have passed away. I prayed for my Children, Meg, Maureen and Katie and all my grandchildren.
God bless everyone for your support and prayer for this momentous day. Pray for me as I will for you
Brother Dismas Mary of the Cross
A Penitent Hermit of Divine Mercy for the Diocese of Banjul, The Gambia

Posted by Brother dismas Mary of the Cross at 5:13 PM No comments:

If you would like to see the consecration pictures, go the the below web site and you can view them. Thanks for your patience.....


http://home.comcast.net/~pbcousineau/Dismas/index.htm
Posted by Brother dismas Mary of the Cross at 9:22 AM No comments:

I am having all sorts of technical problems with getting the consecration pictures on this blog and cant figure out why. All my other pictures come out just fine. I have a cousing hekping but now I am going to call the photographer and ask him to send as attachments and see if he can make them smaller. Say a prayer!!
God bless you all
dismas
Posted by Brother dismas Mary of the Cross at 10:29 AM No comments:

Dear friends,
I am preparing to be consecrated as a Canonical hermit and profess my solemn perpetual vows on the 13th of December. I will be on retreat from 10 December until the Consecration.
From today up to the consecration I am pretty busy with all sorts of practical preparations and with things other things to to do and will be unable to post anything on the blog until after the 13th of December. Please excuse my being away from the blog during this time and I ask you all to pray for me.
In the meantime, if anyone feels led by the Spirit to donate, please feel free to do so. Once again, I am completely out of Malaria Medicines and am so desperate to obtain some. They can only be purchased here so financial contributions will be cery helpful.
I have begun to turn patients away as of today because of the lack of proper meds.. Please, your help would be so gratefully appreciated.
I have lots more pictures of patients and the hermitage all set to post but they will also have to wait until after the 13th.
God bless your kindness.
In His Divine Mercy
dismas
Posted by Brother dismas Mary of the Cross at 6:11 PM No comments: