The Holy Spirit renews us in baptism through his godhead, which he shares with the Father and the Son. Finding us in a state of deformity, the Spirit restores our original beauty and fills us with his grace, leaving no room for anything unworthy of our love. The Spirit frees us from sin and death, and changes us from the earthly men we were, men of dust and ashes, into spiritual men, sharers in the divine glory, sons and heirs of God the Father who bear a likeness to the Son and are his co-heirs and brothers, destined to reign with him and to share his glory. In place of earth the Spirit reopens heaven to us and gladly admits us into paradise, giving us even now greater honour than the angels, and by the holy waters of baptism extinguishing the unquenchable fires of hell.
We men are conceived twice: to the human body we owe our first conception, to the divine Spirit, our second. John says: To all who received him, who believed in his name, he gave power to become children of God. These were born not by human generation, not by the desire of the flesh, not by the will of man, but of God. All who believed in Christ, he says, received power to become children of God, that is, of the Holy Spirit, and to gain kinship with God. To show that their parent was God the Holy Spirit, he adds these words of Christ: I give you this solemn warning, that without being born of water and the Spirit, no one can enter the kingdom of God.
Visibly, through the ministry of priests, the font gives symbolic birth to our visible bodies. Invisibly, through the ministry of angels, the Spirit of God, whom even the mind’s eye cannot see, baptises into himself both our souls and bodies, giving them a new birth.

Speaking quite literally, and also in harmony with the words of water and the Spirit, John the Baptist says of Christ: He will baptise you with the Holy Spirit and with fire. Since we are only vessels of clay, we must first be cleansed in water and then hardened by spiritual fire – for God is a consuming fire. We need the Holy Spirit to perfect and renew us, for spiritual fire can cleanse us, and spiritual water can recast us as in a furnace and make us into new men. 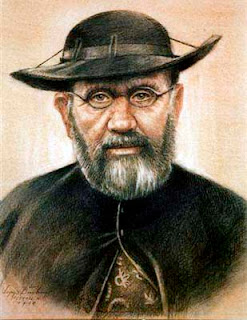 SAINT DAMIEN JOSEPH DEVUESTER
Father Damien was born in Belgium on January 3, 1840. He was the last of seven children. Damien was supposed to inherit the family business and, in preparation, went to study business administration and to learn French. While at school, he attended a Lenten Parish Mission and was inspired with a vocation. It seems that from a young age, Damien was always "all or nothing." Once he had decided on a vocation he wanted to join the Trappists since this was the strictest form of religious life. However, when visiting his brother at the Sacred Hearts Seminary in Louvain, he was persuaded to join the Sacred Hearts. Since he hadn't studied Latin, he was first accepted as a lay-brother. Throughout this earliest period of seminary formation, Damien demonstrated an attraction to austerity that would persist throughout his life. Despite a robust constitution, he ate little and, to discipline himself, he slept on the floor. His brother tutored him in Latin and Damien was then accepted as a priesthood candidate.

While Damien was in seminary, his brother was ordained a priest. Then his brother was assigned to the Sacred Hearts mission in Hawaii. As he prepared to leave, a typhus epidemic hit Louvain. His brother caught the disease while ministering to the sick. Since typhus required a long recuperation, he wasn't able to sail to Hawaii. This left one berth available for a missionary on the ship. Damien, not yet a deacon, wrote to the Superior General asking for permission to take his brother's place. The General gave his permission and Damien left for Hawaii.
Upon arrival in Honolulu, Damien was sent to the windward side of Oahu to complete his studies. In short order, he was ordained a deacon and then, on May 21, 1864 he was ordained a priest in Queen of Peace Cathedral, Honolulu. He was only 24 years old. The Vicar Apostolic, Bishop Maigret, sent him to assist the missionaries on the Big Island. Damien served there for 9 years. 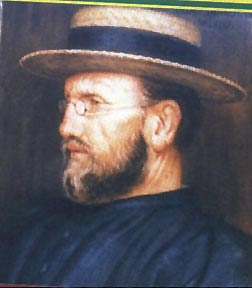 Shortly before Damien's arrival in Hawaii, leprosy began to spread among the native Hawaiians. Most probably, leprosy reached the islands from China by way of the whaling and other commercial vessels transiting the Pacific Ocean. Hawaiians, having been isolated for hundreds of years, had no natural immunological defense against the disease. Once established, it spread rapidly and infected all the islands. This created a crisis for the Hawaiian Government and the King was persuaded to establish an isolation colony to stop the spread of leprosy. The site chosen for this colony is a natural prison on Molokai. A 27 square mile, low lying section of the island was walled-off by 2000 foot-high cliffs. Throughout the islands, government agents identified people showing signs of the disease and shipped them to a detention center in Honolulu. At the center, Western doctors confirmed the diagnoses. Lepers were then transshipped to Molokai.
The leper colony in Kalaupapa eventually included many Catholics who were in need of a priest. Bishop Maigret was loathe to ask any one priest to go and serve them because of the danger of infection and of being quarantined. At a meeting of Sacred Hearts missionaries, he explained the plight of the Catholics on Molokai. Every Sacred Hearts missionary volunteered to go. After more conversation, it was agreed that four priests would rotate through the colony in three month increments. Damien was the first to go.

During Damien's 16 years at Kalaupapa, many different factors contributed to his becoming a Martyr of Charity and Apostle to the Lepers. For most of his time on Molokai, Damien, was the only resident clergyman. Over 16 years, the government became more and more restrictive in terms of who could live in the colony. At first, spouses and servants were able to accompany those who had the disease. Government officials were able to transit freely between the colony and the outside. Over time, the decision was made that no resident could ever leave the leprosarium. This applied to Damien who had been able to travel to Honolulu to conduct business related to the settlement.

The Hawaiian kingdom was not rich and the leper settlement quickly strained its financial resources. When the colony was established, only one dollar ($1) per leper per year had been allotted to provide housing, food, clothing and medical care. When Damien arrived, many sick people lacked even the basic necessities. He became the advocate for the settlement to the government, built houses for every resident, provided conventional medical care and experimented with new medications, planted orchards and imported cattle, built an aqueduct to bring fresh water into the settlement, expanded the pre-existing St. Philomena's church, and established two orphanages (one each for boys and girls). The Sisters of the Sacred Hearts in Honolulu promoted charitable support for the settlement and became the depot for donated goods and services. As the settlement gained notoriety worldwide, donations poured in from all over the world. This was a great relief to the government which tried to provide for the lepers as best they could.

Before Damien left Belgium for the missions, he visited a shrine to the Blessed Mother. He asked her for 12 years of missionary service. It is interesting to note that it was in his 12th year in the leper colony that he was diagnosed with the most virulent form of leprosy. He lived and worked for 4 more years before succumbing to the disease on April 15, 1889. He was 49 years old. On Pentecost Sunday, 1995,Pope John Paul II declared Father Damien among the "Blessed" and gave him the title "Servant of Humanity." Father Damien's Feast Day is May 10, the day he arrived to serve the Leprosarium in 1873.
(Taken from the web site of the Congregation of the Sacred Hearts of Jesus and Mary)
Posted by Brother dismas Mary of the Cross at 8:55 AM