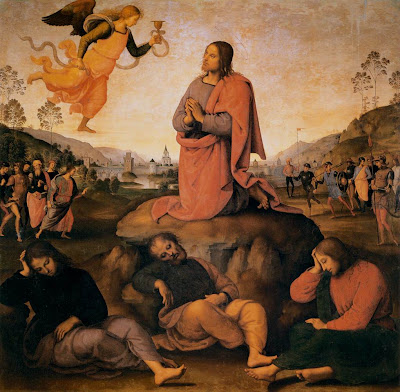 We must not pray in words only, but with deeds.

Why should we be surprised, beloved brethren, that this is the nature of the prayer that God taught, seeing that he condensed all our prayer into one saving sentence of his teaching? This had already been foretold by the prophet Isaiah, who, filled with the Holy Spirit, spoke of the majesty and loving kindness of God: completing and shortening his word in righteousness, because God will make a shortened word in the whole earth. For when the word of God, that is, our Lord Jesus Christ, came to all of us, bringing together the learned and the unlearned, and gave the precepts of salvation to those of every age and sex, he made a compendium of his precepts, so that his pupils’ memories should not be burdened by the heavenly teaching but might quickly learn what was necessary for a simple faith.
Thus, when he taught what eternal life was, he wrapped up the sacrament of life in an all-embracing and divine brevity, saying: This is eternal life, to know you, the one true God, and Jesus Christ, whom you have sent. And also, when he had to gather from the law and the prophets the first and greatest commandments, he said: Hear, O Israel: the Lord your God is one God, and you shall love the Lord your God with all your heart, and with all your mind, and with all your strength. This is the first commandment; and the second is like it: you shall love your neighbour as yourself. On these two commandments hang all the law and all the prophets. And again: Whatever good you wish men to do to you, do it to them: for this is the law and the prophets.
It was not only in words that God taught us to pray, but in actions as well, for he himself prayed frequently and imploringly, showing us his example so that we should follow it, as it is written: But he himself went off to a solitary place and prayed; or, He went out onto the mountain to pray, and continued all night praying to God.
The Lord prayed and beseeched not for himself – for what reason has the guiltless one pray for himself? – but for our sins, as he made clear when he said to Peter, See, Satan wants to sift you as if you were wheat: but I have prayed for you so that your faith should not fail. Later, too, he beseeches the Father for all people, saying: I do not pray for these alone, but also for those who will believe in me through their words: may they all be one. As you, Father, are in me, and I in you, so may they also be one in us. God’s mercy and desire for our salvation are so great that he is not content to redeem us with his blood, but also prays for us over and over again. And now you should see what it was he was praying for: that just as the Father and the Son are one, so too we should be part of that same unity.

SAINT ROMUALD Founder and Abbot(906-1027)
In the tenth century Sergius, a nobleman of Ravenna, quarreled with a relative over an estate and, in a duel to which his son Romuald was witness, slew him. The young man of twenty years was horrified at his father’s crime, and entered a Benedictine monastery at Classe to do a forty days’ penance for him. This penance led to his entry into religion as a Benedictine monk.

After seven years at Classe, Romuald went to live as a hermit near Venice, under the guidance of a holy man who had him recite the Psalter from memory every day. When he stumbled, the hermit struck his left ear with a rod. Romuald suffered with patience, but one day, noting that he was losing his hearing in that ear, asked the old man to strike him on his right ear. This episode supposes great progress in virtue. The two religious were joined by Peter Urseolus, Duke of Venice, who desired to do penance also, and together they led a most austere life in the midst of assaults from the evil spirits.
Saint Romuald, whose aim was to restore the primitive rule to the Order of Saint Benedict, succeeded in founding some hundred monasteries in both Italy and France, and he filled the solitudes with hermitages. The principal monastery was that at Camaldoli, a wild, deserted region, where he built a church, surrounded by a number of separate cells for the solitaries who lived under his rule; his disciples were thus called Camaldolese. For five years the fervent founder was tormented by furious attacks by the demon. He repulsed him, saying, “O enemy! Driven out of heaven, you come to the desert? Depart, ugly serpent, already you have what is due you.” And the shamed adversary would leave him. Saint Romuald’s father, Sergius, was moved by the examples of his son, and entered religion near Ravenna; there he, too, was attacked by hell and thought of abandoning his design. Romuald went to visit him; he showed him the error of the devil’s ruses, and his father died in the monastery, in the odor of sanctity.
Among his first disciples were Saints Adalbert and Boniface, apostles of Russia, and Saints John and Benedict of Poland, martyrs for the faith. He was an intimate friend of the Emperor Saint Henry, and was reverenced and consulted by many great men of his time. He once passed seven years in solitude and total silence. He died, as he had foretold twenty years in advance, alone in his monastery of Val Castro, on the 19th of June, 1027, in an advanced and abundantly fruitful old age.
By the life of Saint Romuald, we see how God brings good out of evil. In his youth Saint Romuald was much troubled by temptations of the flesh; to escape them he had recourse to hunting, and it was in the woods that he first conceived his love for solitude. His father’s sin prompted him to undertake a forty days’ penance in the monastery, which he then made his permanent home. Some bad examples of his fellow-monks induced him to leave them and adopt the solitary mode of life; the repentance of a Venetian Duke brought him his first disciple. The temptations of the devil compelled him to lead his severe life of expiation; and finally, the persecutions of others were the occasion of his settlement at Camaldoli, mother house of his Order.
Posted by Brother dismas Mary of the Cross at 8:11 AM